Malaysia History has been influenced to a great extent by outside influence of Hindu Kingdoms, the arrival of Islam in the 10th century, the intrusion of European colonial power, the Japanese occupation during World War Two and the establishment of a multi-racial Federation of Malaya in 1957.

The Hindu Kingdoms ruled the Malays world from 100 BC to 1400 AD and reached its peak in the Srivijaya civilisation based in Sumatra. During this time, Hindu culture were imported from India and archaelogical findings in Bujang Valley in the state of Kedah showed that there were ruins of an ancient Hindu Kingdom dating back to the year 300 AD. You will be able to see some of the relics on display at Bujang Valley Archaeological Museum. 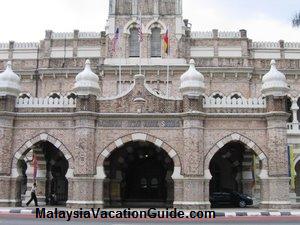 The arrival of Islam in the 10th century led to the conversion of the Malay and Indonesian world. It reached its golden era from 1400 AD to 1511 AD during the reign of the sultanates in Malacca. Islamic culture and trading of goods prospered during this time.

The European colonial powers came into this region to conquer the land for its rich spices, minerals and as army posts in South East Asia. The Portuguese captured Malacca in 1511 followed by the Dutch and finally the British. During the time of British reign, many Chinese and Indians were brought from Southern China and Southern India to work in the tin mines and rubber plantation. 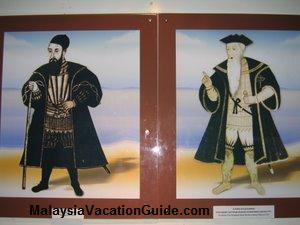 The Portuguese Admiral Alfonso De Albuquerque on the right during the conquered of Malacca.

Then came World War Two and the Japanese occupied Malaya from 1942 to 1945. After World War Two, the British resumed their control of the country. After a series of diplomacy and discussion between the leaders of the country and the British, the multi-racial Federation of Malaya was established in 1957.

In 1963, Malaya became Malaysia with the joining of Sabah, Sarawak and Singapore as part of Malaysia. However, Singapore separated from Malaysia in 1965.

Malaysia since 1970 has been ruled by the National Front Coalition consisting of parties that represent the Malays, the Chinese and the Indians communities.

Since than, Malaysia has prospered economically and has become one of the most developed country in South East Asia.

The National Museum near KL Sentral is a good place to start with to discover the history of Malaysia.

Remember to visit the Malay World Ethnology Museum which is located just beside the National Museum. Entrance to this museum is free. 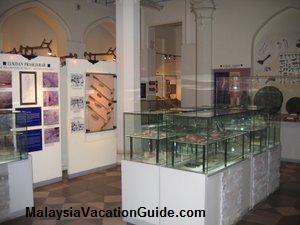 The items on display in the Museum.

Related places to visit on the history of Malaysia, numismatic museums, memorial parks and monuments.


Asian Art Museum
See the collection of 6,000 artifacts from Malaysia, China and other Asian countries in this museum which is located at the main campus of the University of Malaya.

Bio Medical Museum
This museum is located beside Kuala Lumpur Hospital. A good place to learn about the history of Institute for Medical Research. 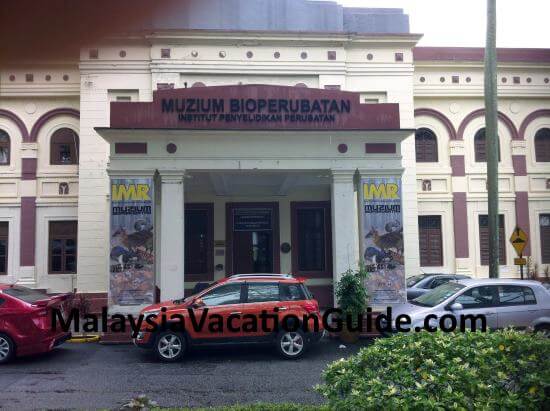 Heritage Centre
See the traditional Malay house at the compound of Badan Warisan Malaysia which is located near The Royale Chulan Hotel, Kuala Lumpur.


Malacca
Malaysia history knowledge is not complete without visiting the historical state of Malacca and see the many heritage buildings left behind by the Portuguese, the Dutch and the British. Make sure you try the Nyonya and Portuguese cuisines as well.

Malaysia Textile Museum
This museum is located opposite Dataran Merdeka and is a good place to know more about the evolution of textiles in Malaysia.

Music Museum
This museum which used to be located opposite Sultan Abdul Samad Building had been closed in 2017 due to lack of funds.

National Monument
Visit the National Monument in the vicinity of Lake Gardens in Kuala Lumpur that was built to remember the soldiers who gave their lives to defend the sovereignty of the nation.

Money Museum Bank Negara Malaysia
Discover the types, shapes and the colours of currency used in the golden days. Head to Bank Negara Money Museum in the city of Kuala Lumpur and appreciate the collection of numismatic from Malaysia and the world.


Petaling Jaya Museum
Learn the history and origin of the city of Petaling Jaya at this single storey museum.

Royal Museum
This museum in Kuala Lumpur was the former Istana Negara and is now open to the public to visit.

RRIM Rubber Products Exhibition Centre
Learn more about the history of rubber in Malaysia and the products make from this commodity. This centre is located in Sungai Buloh.


Kellie's Castle
Over at the north of Peninsular Malaysia, see the ruin of an uncompleted mansion in Batu Gajah, 30 km away for Ipoh, Perak.


Perak Museum
If you are in Taiping, make it a point to visit the oldest museum in Malaysia built over 125 years ago. While in Perak, drop by Beruas Museum and see the artifacts related to the Gangga Kingdom.

Natural History Museum, Putrajaya
This museum used to be located at Precinct 15 but had been closed. It will now be relocated to another premises.