Sarawak is located on the island of Borneo and is part of Malaysia since 16 Sept 1963. It is also known as the "Land of the Hornbills" as there are many hornbill birds that can be found in most parts of the state. This state is rich in history and many believe that it is even older in civilization compared to Peninsular Malaysia. Niah Caves is the archaelogical site of the 40,000 year-old human remains.

The state was under the control of Brunei Sultanate from the 15th to early 19th century. When James Brooke arrived, this state became a separate political region and hence the start of the Rajah Brooke reign from 1841. The Japanese rule during the World War II followed by the British rule until the formation of Federation of Malaysia.

The flag of Sarawak.

Eco-adventures are the main reasons why tourists come to this state. You will experience longboat trips on the muddy river, explore the tropical rain forests in the many national parks, seeing the huge caves in Mulu National Park, close encounter with Orang Utans and Hornbills.

If you want to experience cooler weather, head for Kelabit Highlands where the temperature is cooler. Scuba diving and snorkelling activities can be found at Belais Reef which is located off the town of Miri to enjoy the various marine life here.

See also the 2021 Sarawak Tourism Events that you can participate while visiting this state.

Recently Kubah National Park in Kuching was voted as the most beautiful sound in the world by BeautifulNow website. It was a recording by Marc Anderson, an Australian who recorded the park entitled "Dusk By The Frog Pond".

Kuching is the state capital located by the river. Its name means cat in the Malay language. Visit some of the museums in Kuching, many of them are within walking distance of each other with the main one being Sarawak Museum. Notice also the many historical buildings built during the reign of Rajah Brooke.

You can also do a day trip tour to Bau and visit the Wind Cave and Fairy Cave which are about 45 minutes drive away from Kuching.

Today, the Iban is the biggest community here with about 30% of the population. They came from Kalimantan and were once headhunters. Other ethnic groups are the Bidayuhs, Melanaus and Orang Ulu.

If you are looking for souvenirs, take note that the Ibans are well known for their colourful textiles known as the "pua kumbu". The Orang Ulu for their beadwork, the Melanau and Bidayuh for their baskets using bamboo, tree bark, palm and rattan. The Chinese are known for their pottery-making skills.

Visit the Cultural Village to learn more about the various ethnic groups here. It is also the location of the annual "Rainforest World Music Festival".

Bako National Park is only 37 km away from Kuching. Enjoy the beaches and the unique arches on this park.

Gunung Mulu National Park one of the most visited park in the state. It is a World Heritage Site and has the world's largest cave chamber. Many also trek to the Pinnacles Trail to observe the 1,200m pinnacles.

Lambir Hills National Park is only 30 minutes drive away from Miri. Drop by if you have the time and enjoy the waterfalls, polls, flora and fauna here.

Loagan Bunut National Park is the location of the biggest natural lake in this state. It is about 3 hours drive away from Miri.

Niah National Park is one of the most important archaeological site in Southeast Asia. The caves are believed to be the shelter for the early humans 40,000 years ago.

Talang Satang National Park is the place to go to learn more about the Green turtles conservation effort. It is only 30 minutes boat ride away from Damai Beach. 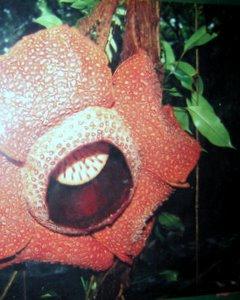