In conjunction with the country's 50th Merdeka Celebration, 50 things have been chosen as a national heritage that all the peoples of Malaysia should be aware. The 50 things consists of 18 buildings, 20 objects and 12 cultural practices. The buildings listed include the Parliament House, Sultan Abdul Samad Building and the National Mosque.

The objects include the national flag, the hibiscus flower and The Royal Long Keris. The cultural practices include the lion dance, the Malay Joget and Ngajat.

These national heritage were chosen by the Ministry of Culture, Arts and Heritage of Malaysia. With this, Malaysia now joins countries such as Britain, USA, Germany, France and Australia in having legislation to protect their heritage. 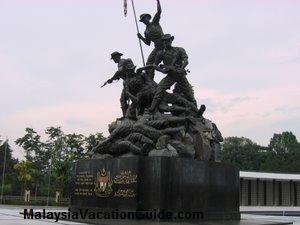