Kuala Lumpur Public Transport has developed into one of the most modern transportation system in this region. It has a comprehensive network of buses, taxis, monorail, light rail transit and commuter trains that provide convenient and quick access to various parts of this city and its surrounding.

KL Sentral is the main hub of the transportation system in Kuala Lumpur where you can take the Light Rail Transit trains, KTM trains, Rapid KL buses, ERL and even do your passenger and luggage check-in. The latest addition is the Subang Skypark Line. 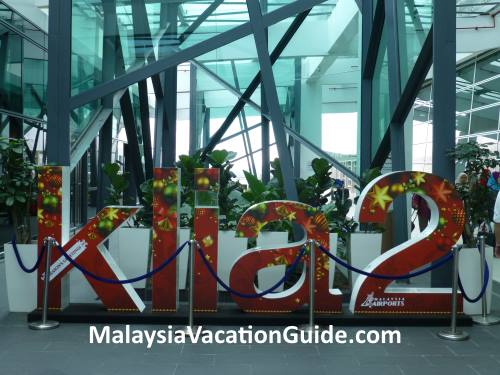 The two main international airports in Kuala Lumpur are the newly opened KLIA2 and KLIA (Kuala Lumpur International Airport). KLIA2 is now in operation since 2 May 2014 and is the airport for low cost and budget carriers.

The other smaller airport that is used by Firefly, Malindo Air and Berjaya Air is Subang Skypark Terminal.

Get a suitable MyRapid Card to travel with discounts on Rapid KL buses, LRT, Monorail or BRT.

You can now explore KL on bicycles. Bicycles together with safety vest, helmet and map can be rented at KL City Gallery near Dataran Merdeka.

Light rail transit is the most preferred mode of transport as it is punctual and the cost of traveling is reasonable. As it has its own track, the traveling time is not affected by the traffic jam that happens almost everyday during the weekdays. Operation time is from 6am to 11:45pm. Train interval is 3-5 minutes during peak hours and 5-8 minutes during non peak hours.

The Kelana Jaya Line stretches from Putra Terminal in Gombak to Putra Heights. This is the line that you need to take if you intend to go to KLCC, Ampang Park or Bangsar. 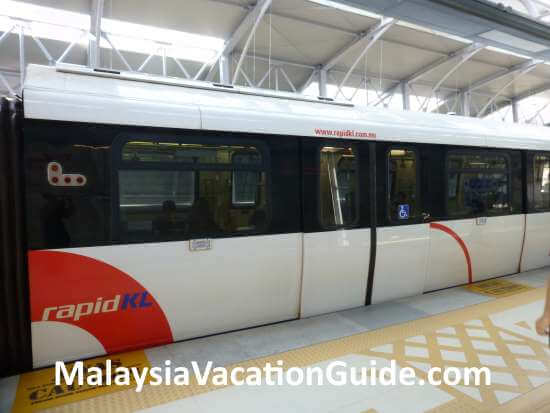 The Ampang Line stretches from Ampang to Sentul Timur.

Sri Petaling Line runs between Sentul Timur in Sentul to Putra Heights. If you need to go to Bukit Jalil or Cheras, this is the line to take.

See the map at the end of this page for the routes and stations covered by the LRT.

There are 31 stations that are available for use from Sungai Buloh to Kajang covering a distance of 51km. The operation hours of the MRT are from 6am to midnight from Mondays-Fridays and 6am-11:30pm on Saturdays and Sundays. See more details of this mode of transportation here. 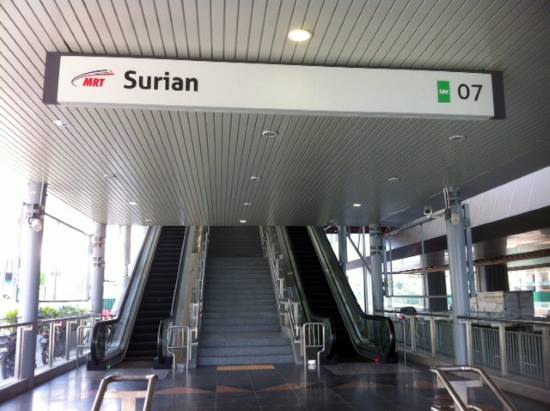 Stop at Surian MRT Station to go to Sunway Giza, The Strand or Dataran Sunway.

This KTM train line will take you from KL Sentral to Subang Skypark Terminal within 30 minutes. There is a stopover at Subang Jaya. 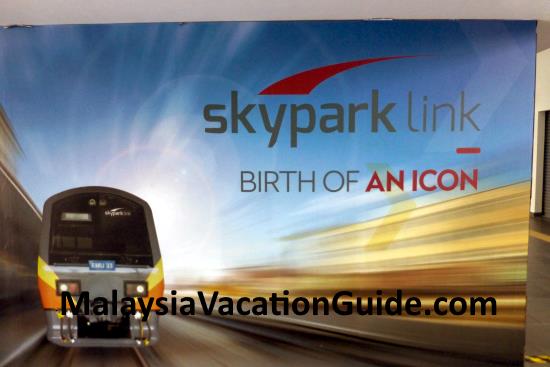 Local students aged 13 and above can now get the KTMB 50% discount card for long-distance travel from all KTMB stations. All secondary school students, students of public and private higher-learning institutions, part-time or distance learning students can apply for the cards.

However, students of teacher training, nursing, police and armed forces colleges and health institutes will have to pay RM30 annually for the card.

The card is only valid for second and economy-class train travel and can be obtained from KL Sentral and other KTMB offices.

If you intend to go to Sunway but want to avoid the traffic congestion during the peak hours, take the Sunway BRT which was launched on 2 June 2015.

The Kuala Lumpur public transport include the monorail which serves 11 stations covering a distance of 8.6 km in the city centre. Major shopping centres such as Bukit Bintang, Imbi and Chow Kit are serviced by the monorail. It stretches from Kuala Lumpur Sentral Station to Titiwangsa Station.

There are many buses that serviced the city of Kuala Lumpur and its surrounding. All the buses are air conditioned.

Move around the city of Kuala Lumpur on Rapid KL buses from RM1+ depending on your destination, much lower than taking a cab if you are not rushing for time. There are a few selected routes from the outskirts of KL that go direct to Pasar Seni in Kuala Lumpur using expressways. The free shuttle buses in the city provided by the government is GOKL. See the routes here. 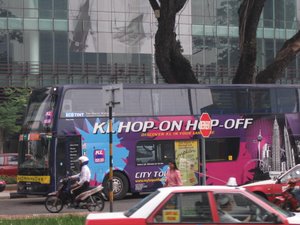 The KL hop on - hop off bus is a double decker tour bus with state of the art facilities. It has 8 multi language tour commentary to choose from as you travel around the city.

Bus Terminals To Other Cities and Towns

There are a few bus terminals that you can take your buses to destinations throughout Peninsular Malaysia from Kuala Lumpur.

Hentian Pekeliling goes to major towns of Pahang such as Jerantut, Mentakab, Temerloh and Kuala Lipis.

There are many taxis that you can take in the city and they are available 24 hours a day. The flag-off rate is RM3 with RM0.10 charged for every 115 metres.

For taxis caught in a traffic jam, the fare will be RM3.00 for the first 3 minutes, and 10 cents for every subsequent 21 seconds.

If booking is done through phone, additional RM2 is charged. Extra luggages or passengers will be charged RM1 each. A 50% surcharge is levied between midnight and 6.00am.

The latest Firefly budget airline is owned by Malaysia Airlines System. With Penang as its base, the new airline will be offering flights from Penang to Kota Baru, Kuantan, Kuala Terengganu, Langkawi, Phuketand Koh Samui. It will initially use two 50- eater Fokker 50 aircraft for its operation.

Bookings can also be made at MAS ticketing offices in Penang, Kuala Lumpur, KLIA, Kota Baru, Terengganu, Kuantan and Langkawi. Online booking is available through the Firefly website.

The tickets are priced similar in concept to No Frills AirAsia Airline.

The KLIA Express and KLIA Transit are the fastest means of transport to get you from KLIA and KLIA2 to the city.

The KLIA Express takes 31 minutes to get you from KLIA2 to KL Sentral Station and 28 minutes from KLIA to KL Sentral. It departs every 15 minutes during peak hours. Peak hours are defined as the time from 6:00am to 9:00am and 4:00pm to 10:00pm from Sunday to Friday.

The KLIA Transit takes 38 minutes from KLIA2 to KL Sentral with stops at KLIA, Salak Tinggi, Putrajaya & Cyberjaya and Bandar Tasik Selatan. The journey time between KLIA2 and KLIA is 3 minutes.

The one-way fare from KLIA/KLIA2 to KL Sentral is RM55 for adult and RM25 for child for both KLIA Express and KLIA Transit. Return fare is RM100/adult and RM45/child. Get 10% discount when you buy tickets from www.kliaekspres.com, apps or kiosk.

Download the bigger image of the MRT, LRT, Monorail, ERL and Komuter rail transit network from Rapid KL by clicking on the picture below. Make sure you have a pdf reader as the image is in pdf format. 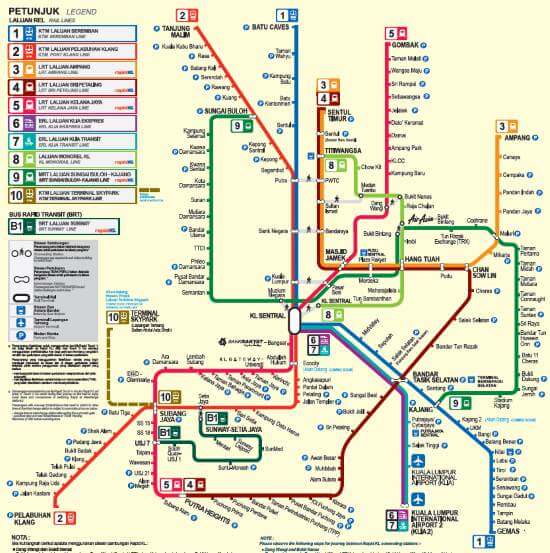 The telephone listing below shows the contact numbers of taxis,  Komuter Train, KLIA Ekspres, KLIA Transit, car rental and airlines that you can call when the need arises.


KTM Trains
KTMB provides KTM Komuter Train within Klang Valley, Electric Train (Seremban-Ipoh) and Intercity Train travel within Peninsular Malaysia. It is one of the most economical way to travel when you are on vacation in Malaysia.

1 Utama Coach to klia2
For a price of RM15/person one-way, you can now take the Skybus airport coach from 1 Utama Shopping Centre to klia2 Airport. It takes approximately 1 hour 15 minutes to reach the airport and vice versa. Tickets can be purchased on the bus or AirAsia Flights.

Explore Kuala Lumpur On Trams Watch out for trams services that are available for you to explore the heritage and parks in Kuala Lumpur.

Old LCCT  This is how the old LCCT terminal looked like. The new airport for low cost carrier is now based in KLIA2.