Cyberjaya in Sepang is located to the west of Putrajaya, the new Federal Government Administrative capital of Malaysia. It is a well planned township with a science park which forms the Multimedia Super Corridor of Malaysia. This big piece of land used to be a oil palm plantation before it was chosen by the government of Malaysia as the new silicon valley of Malaysia. 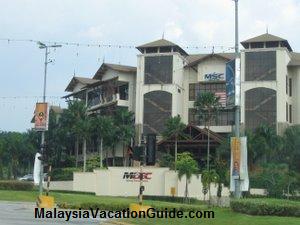 MDec has been tasked to make it the intelligent IT city of Malaysia and in this region. 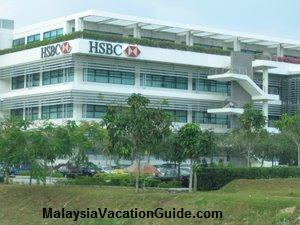 The HSBC 24 hours Call Centre which is located in the heart of the city.

MDec has been tasked to bring this vision to pass and the headquarter is located in the city itself.

The development of this intelligent city is done based on the theme of making this city a multimedia centre that will attract many multinational companies in the area of IT and multimedia from around the world. The infrastructure and IT facilities of this city has been planned to make it the most modern and sophisticated in this region. Modern transportation systems has also being planned to make this a city that is accessible from all parts of Malaysia.

As of today, this intelligent city has attracted many multinationals to invest and re-located here. They are IBM, Shell IT, Ericsson, HSBC, Nokia, EDS, DHL and Vivanova Systems. Currently, there are more than 250 multinational companies that are operating from this city.

One of the more successful private university is the Multimedia University (MMU) which is located here. This university has a multi-nationals enrollment of more than 12,000 students as of this point of time. Students come from as far as Bangladesh, China, Pakistan, Nigeria, Egypt and many other countries of the world making it among one of the universities with the most number of foreign students. Core courses on offer include Multimedia, Electrical Engineering, Telecommunication Engineering, Electronic Engineering and Information Technology.

The other university is the Limkokwing University of Creative Technology (LUCT) which offers many courses related to creative arts and design. This university too has many foreign enrollment and has opened branches in the United Kingdom and Africa as well.

The CUCMS college was launched in the year 2006 offering medicine and other related courses. 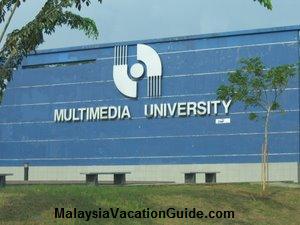 This park is located further down the road after Multimedia University and Cyberia Smart Homes. This park is usually utilize by the students and residents nearby for recreational purposes. There is a nice and clean lake within this park where one can take the time to enjoy the scenery and tranquility of this place. It is spread over an area of approximately 3 hectares.

Facilities that are built here include jogging tracks, picnic areas and bridges over certain parts of the lake. Children will be able to enjoy the new children's playground that is located in the middle of the park. Those who need to sweat it out can use the open-air gymnasium which include the bean jump, challenge ladder and push-up bars. 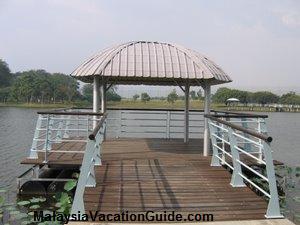 The raised platform near the lake. 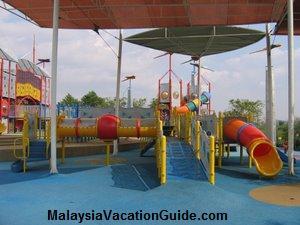 The well equipped playground in the middle of the park.

Public transport is also available. The ERL KLIA transit train which is connected to the KLIA airport pass by here every 30 minutes. The station to stop is at Putrajaya Sentral. There are feeder bus which will take you to this city.

For those coming from 1 Utama Shopping Centre in Petaling Jaya, there is a shuttle bus service that cost RM3 per trip that can be purchased at the Customer Information Counter in 1 Utama.

Getting here from KL City Centre is now easier with the opening of KL-Putrajaya/Cyberjaya Expressway. It will take you about 20 minutes to reach Cyberjaya from KLCC. The toll charges from KG Pandan Roundabout Interchange to Cyberjaya/Putrajaya Interchange is RM2.50 for cars.