It is located near Kuala Lumpur Bird Park and is opposite the National Planetarium. The museum was officially opened by Prime Minister of Malaysia Datuk Seri Abdullah Ahmad Badawi on July 24, 1999. There are special theme exhibitions that are held here every 3 months.

The compound of the museum is well kept and there are a few items that are on display here. You will be able to see various armoured personnel tanks, a boat and a Cessna plane being exhibited. There are also a collection of cars that were used by previous ISPs of Malaysia. 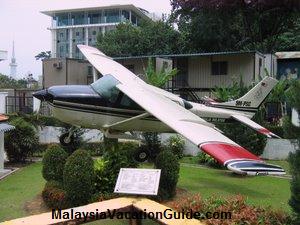 The Cessna plane can be seen as you enter the compound of the museum. 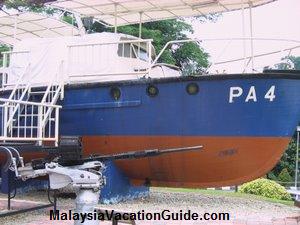 The old boat that were used by the Marine Police is also on display here.

Entrance to the museum is free with many interactive touch screen terminals that you can use to find out more information about the history of the police. The museum is divided into 3 galleries.

The first gallery exhibits the police uniforms that were used since its establishment in Penang on March 25, 1807. You will also be see the Malacca Sultanate era in the year 1400, the conquered of Malacca by the Portuguese followed by the Dutch and the British. A collection of police related plaques are also exhibited here.

The second gallery shows the history of the models of vehicles that were used by the police. Different types of weapons that were confiscated from the criminals and communists are on display as well. This section also traced the humble beginning of the police force in Penang until today. 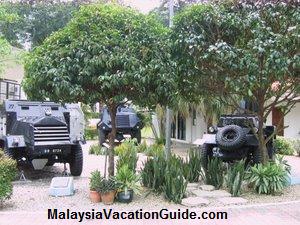 The tanks on display outside the entrance to the Police Museum.

The third gallery shows the most trying times for the nation. They include the history of Japanese Occupation during World War Two, the state of emergency when the communists terrorised the land, the Confrontation with Indonesia, the Bukit Kepong incident in Feb 23, 1950 when the communists attacked the police station in Kepong and killed 25 police officers and their families as well as the May 13 racial riots. The previous IGPs of the nation and other important individuals were also highlighted here.

The admission to the museum is free. 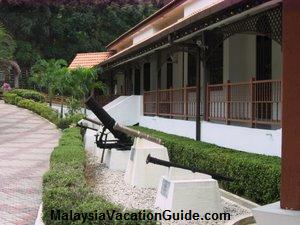 The old cannons on display at the side of the main building.

Taking taxi to this place is the most convenient method of transport.

If you do not mind walking, take the KTM Komuter and stop at Kuala Lumpur station. Cross the underpass and walk towards the National Mosque. Follow the signage and you should be able to reach the Police Museum in approximately 25 minutes.