If you are wondering where to go for a time of splashing fun and adventure, head for Sunway Lagoon Theme Park and you will not regret it. This theme park was established in the year 1992 and has been attracting 2 million visitors annually.

Visitors come from as far as China, Singapore, Australia, India and the Middle East to name a few. This park is now a part of the Bandar Sunway township which was formerly a tin mine. Surrounding this theme park are other amenities such as hotels, institution of higher studies, medical centre, Sunway Pyramid Shopping mall and offices.

This 80 acres theme park has one of the world's largest man-made surf beach as well as the world's longest pedestrian suspension bridge. There are over 30 different wet and dry rides in this park. An extreme park and wildlife zoo are also located here. The followings are some of the attractions that you can enjoy. 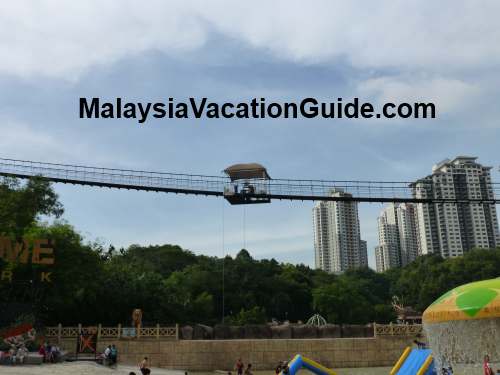 The 428 m long suspension bridge at Sunway Lagoon Theme Park offers you a fantastic view of the park. You can do bungy jumping here as well though it may not be as thrilling as the one in Queenstown, New Zealand.

The World of Adventure include walking on the 428 m suspension bridge that enables you to see the entire park. Enjoy The Lost City of Gold ride where you will be taken through tunnels and tarantulas during the roller-coaster ride. The Tiger Adventure will take you to an educational experience with the Bengal and Siberian tigers. The Pirates Revenge is a rotating pirate ship that swivels 24 m above the ground.

Waters of Africa has 12 rides and attractions. The newly refurbished attraction called Sunway Surf Beach has a rolling surf pool sandy beach made out of over 6,000 tonnes of sand. On top of that, there are more than 146 palm trees and Balinese huts. You will be able to build sand castles, relax under the palm trees or have a game of beach volleyball with your friends and family members. The surf pool is capable of producing 8 feet tall surf waves for your surfing pleasure. 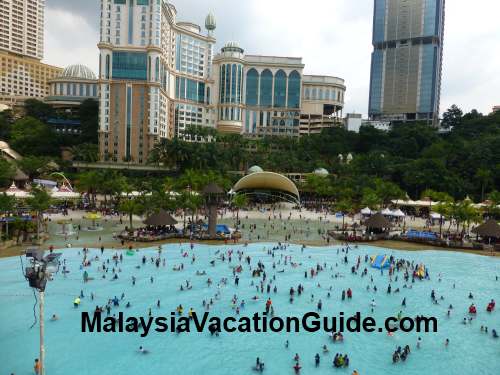 Your family will enjoy the giant water slide called the African Pythons where you will spin around in loops on a water slide before coming out of the gigantic tube.

There are 10 rides and attractions at this location. Named after the American wild wild west, see the Apache Indians as you stroll along this town. Get wet as you ride the Niagara Falls Flume Ride. This ride will take you up to a dark tunnel before splashing down into the water. Sit down and relax as you swirl around the waters at the Grand Canyon River Rapids.

Remember to keep all your belongings in a water tight plastics if you intend to bring them along with you. Otherwise, keep them at the many locks that are available at the park.

The entrance fees to the theme park will allow you to go to Nickelodeon Lost Lagoon, Water Park, Amusement Park, Wildlife Park, Extreme Park & Scream Park. The published rate is RM190/adult and RM160/child(12 years old and below).

If you are certain of going to this theme park, buying online rates will be cheaper compared to walk-in rates.

Getting to Sunway Lagoon Theme Park

The theme park is about 45 minutes drive from the city of Kuala Lumpur on the Federal Highway.

You can also take the KTM Komuter train and stop at Subang Jaya Station. From here, take a taxi or feeder bus to Sunway Pyramid.

Alternatively, take the PUTRA Kelana Jaya LRT and stop at Kelana Jaya station. From here, take the Rapid KL bus T 623 that will take you to Sunway Pyramid.

The address of the resort: