Jugra is a historical town that is located in the district of Kuala Langat and is about 8 km away from the more developed town of Banting in the state of Selangor. The popular "begger chicken" Chinese cuisine is just within the vicinity. Many folks from Kuala Lumpur drive all the way to this place to savour this unique cuisine. Traders who navigate along the Straits of Malacca in the past used this place as a landmark to aid them in their navigation. It was also known to them as Parcelar Hill. 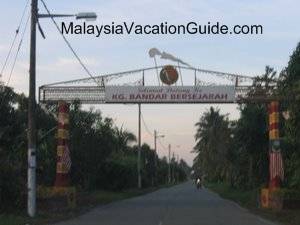 The entrance to the quiet historical village of Kampung Bandar. 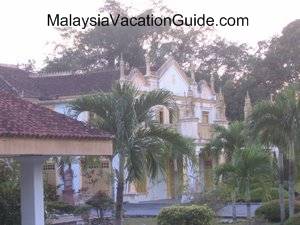 The huge Bandar Palace that sits among the lush greenery of the quiet town of Kampung Bandar in Jugra.

If you are somewhere near Klang or Banting and are keen to see old architecture of buildings, this is one of the place that you can consider going. It used to be the royal capital of Selangor when Sultan Abdul Samad decided to move there in 1875. He stayed there until he died in the year 1898. Sultan Alaeddin became the fifth Selangor Sultan and began to plan for the construction of Bandar Palace or Istana Bandar. This palace was built in 1905 and he lived there for 35 years until his death.

The palace was built on a 13 acre land and has two levels with 15 rooms. You will be able to see the beautiful landscaped as you enter the compound of the palace. Cengal wood and marble were used during the construction of this palace. After more than 100 years, this structure still remain strong today, the evidence of the excellent engineering skills of the people during that time. You will also see family portraits of the royal family that have been placed on the walls.

The architecture of the palace is based on Malay design but with the influence of Chinese, Indian, European and Islamic features.

The last significant occasion of this palace was the installation of Sultan Sulaiman. He then decided to move his official residence to Klang. 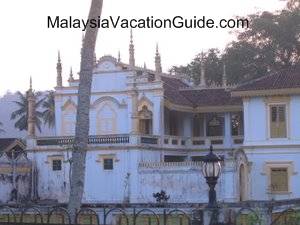 Another view of the palace from the main road that leads this historical landmark.

Further up the road is a mosque known as Sultan Alaeddin Mosque. It was built in the year 1932 with a Moorish architecture that still stand strong today by the fifth Sultan of Selangor, Sultan Alaeddin who also built the Bandar Palace. The design of this mosque was believed to have originated from Deli Kingdom in Medan, Sumatra. Notice the similarity of this Moorish architecture with Sultan Abdul Samad Building near Merdeka Square, Kuala Lumpur. 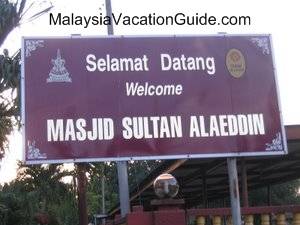 The big signage that you will see at the entrance to the mosque. 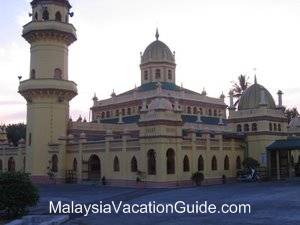 The front view of the huge mosque that was built in 1932.

Within the vicinity are also the Royal Mausoleum, Lighthouse and the ruins of Istana Jugra that you can drop by to make your visit here worthwhile.

The best way to come to Jugra is by driving. If you are coming from Klang, it will take you about 80 minutes to reach here. The distance is approximately 80 km. The reason for the longer time to reach here is because there are many traffic lights and the road leading to Banting is a busy trunk road.